We can do your termite inspection, and if you need a termite treatment we can refer you to our reputable partners.

Termites colonize to protect the species from extinction. The termite colony consists of a queen, king, soldiers, workers, and winged and wingless swarmers. The only difference in the termite and ant colonies is the additional member – the king. Each member has important duties that play a major role in the daily operations of the colony.

The diet consists of cellulose-based materials, such as cardboard, cotton, lumber, and paper. The termite also erects underground tunneling systems like the ant colony. The entrance to the termite underground tunnel is generally detectable for a short distance away. At the top of the tunnel entrance, sits a pile “mound” of dirt.

When the termite colony grows to a significant number, the tunneling system must be expanded to accommodate. Some termites will be forced to bore holes in decaying wood for shelter. To gain easy and quick access to the shelter, termites create mud tubs at the entrance.

Like the ant queen, the termite queen grows larger than all other members. She can grow up to 4 inches in length. Instead of manually repositioning, the queen termite relies on a colony of hundreds of workers to do it.

The queen is responsible for growing the population, reproducing up to 30,000 eggs per day. Her lifespan is significantly longer than all the other colony members. She can live up to 10 years in a controlled environment.

Workers also assist in feeding and caring for the young.

The soldier’s head is slightly larger than the worker’s and swarmer’s.

Denver residents primarily have to worry about Subterranean termites. These termites are commonly found in our area.

Many termite species build underground colonies. Subterranean termites fit into this category. They build mud tubes when living above ground. During spring, these termites produce swarmer termites to spread the colony elsewhere.

Ultimately, Subterranean termites are immensely problematic because they can destroy your property. If you don’t get rid of them, they’ll destroy your home. They’ll chew through the wood and make your home unsafe. Over a period, ignoring the problem will leave to expensive property damage.

Learn more about termites by reading the facts below.

Termites need to be removed from your home swiftly. However, they’re not dangerous and do not transmit serious illnesses. They don’t bite humans or pets. Instead, they bite and chew through wood. Since your home contains many wood columns and surfaces, it is at risk. If you don’t remove them from your home immediately, they’ll destroy it. Contact us so we can get rid of them for you immediately.

Tackling The Problem On Your Own

You can try tackling the problem on your own, but doing so might not be wise. The issue is that you’re going to run into serious issues. If you try to fix the problem without professional assistance, you may run into problems. For instance, you may not use the right treatments. Alternatively, you might use dangerous chemicals or you might misuse them. The risks are immense. Work with our exterminators so you can fix the problem without experiencing severe repercussions.

When Can The Extermination Start?

We’re proud to provide you with the safest treatments. When working with us, you can rest assured knowing we’re going to take steps to keep you safe. Our exterminators rely solely on products registered with the Environmental Protection Agency because these products are safe and reliable. Although you could try fixing the problem on your own, the risks are grave. Work with us and take care of the problem while staying safe.

Preventing Termites From Destroying Your Home

Use the tips below to stop termites from destroying your home. 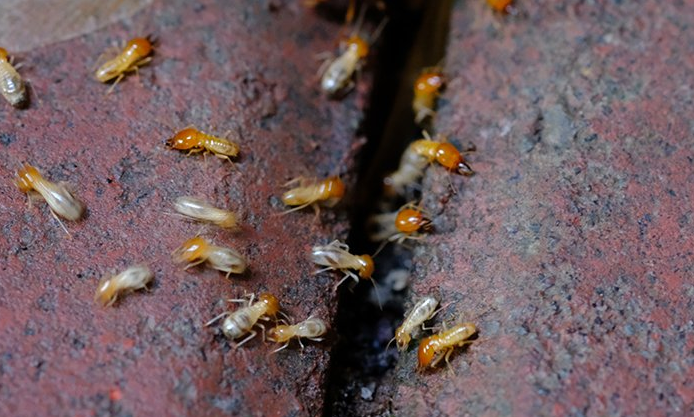